Do your kids love Go-Gurts as much as mine do? I have to admit; they’re pretty delicious. However, even the “Simply Go-Gurts” contain chemicals that I don’t necessarily want my children to eat on a regular basis, so I decided to make some homemade yogurt tubes instead.

We drink raw milk that we purchase from a local farm share each week, but you can make this with any plain yogurt. Greek yogurt works as well. Most importantly, you just want to pick a plain, unflavored yogurt. You’re creating the flavors, not the company.

You can customize this recipe as well. My kids prefer strawberries, raspberries, mixed berries, or banana. Your kids might be a citrus or tropical fruit fan. You could even toss in some spoonfuls of strawberry jam!

What You Need to Make Homemade Yogurt Tubes

To make these homemade yogurt tubes, I use Zipzicles, which come in a 100-pack and cost around $13. You could find reusable silicone sleeves if you want to avoid tossing these out.

I like the Zipzicles because they’re cost effective and bigger than Go-Gurts from the store. A Go-Gurt holds around 2.25 ounces, and Zipzicles hold around 3 ounces.

I highly recommend that you purchase a collapsible funnel to use with this recipe. I tried without a funnel, and it was a messy disaster. In the end, I lost half of the yogurt. It’s worth it!

We have the Ninja Blender, and it’s the best at making smoothies. If you’re in the market for a new blender, check it out. You won’t regret it! I like that this blender comes with the cups for smoothies. We make smoothies or blended coffee drinks, and the cups are great.

Making these yogurt tubes is insanely easy. It takes less than 5 minutes to sweeten and flavor the yogurt. The longest process is filling all of the little tubes, but that’s done in just a few minutes.

In this recipe, I use raw honey, which is a healthy choice for your family. If you happen to have an infant under the age of one year old, then you shouldn’t give these to your baby. Giving babies honey before they are 12 months old increases the risk that they would be exposed to botulism spores on the honey.

Before Jolene turned a year old, I made these yogurt tubes for her and use real maple syrup as the sweetener. It will make the yogurt runnier, but since we freeze most of the tubes, that wasn’t an issue. Now that she’s a year old, she’s eating the honey-based ones like her siblings.

Of course, we made these homemade yogurt tubes to give our children a healthy alternative to a beloved item from the store, but we do want to be smart with our money. Right?

Let’s break down the cost of these tubes.

I purchased a bag of organic frozen blueberries for $2.50 at Aldi, and the honey was around 1/4 of our jar. So, rough calculations is that the honey cost around $2.50.

Organic yogurt tubes come in boxes of 8 for around $3.50 or more, depending on the brand. Those tubes hold around 2.25 ounces, which equals $0.19 per ounce.

Zipzicles hold 3 ounces per tube and I made 15 tubes, which equals 45 ounces. The total per ounce for my homemade yogurt tubes is $0.24 per ounce.

Would you pay $0.05 more per ounce to have organic, healthy ingredients in your child’s yogurt? I would and do! Not to mention, these tubes are bigger, so they’ll fill your child up more. You can alter this price by using coupons or different cost items. 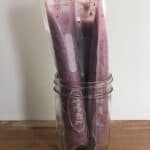 Yogurt tubes that you purchase in the stores are full of artificial sweeteners and chemicals. This homemade recipe is easy and healthy for you!

Pin It for Later

Check Out These Popular Posts